Dicky’s Skull, or Dickie, is a fairly well-known Peak District legend. The haunted cranium is a standard inclusion in an endless sequence of Derbyshire guidebooks and much has been written about it already. However, my own investigation can provide you with an updated overview of the whole mystery, as well as the unearthing of an obscure stage play called Plays of Derbyshire Life: Dickie’s Skull. Seeing as the nights are drawing in and the witches’ eve is fast-approaching, I thought I would visit Dicky again and perhaps, finally put the poor soul to rest.

Origins of the Skull

There is some uncertainty about who exactly the skull belonged to and how it came to reside at Tunstead Farm near the town of Chapel-en-le-Frith. The most common version of the story specifies its owner as Ned Dickinson who returned from the Huguenot Wars in France (1562-98) to reclaim his farm, only to find it had been taken over by his murderous cousins who were not too keen to give it back. They chopped off Ned’s head and buried him in the garden, only to find the severed bonce back in the house one dark night, where it insisted on remaining. 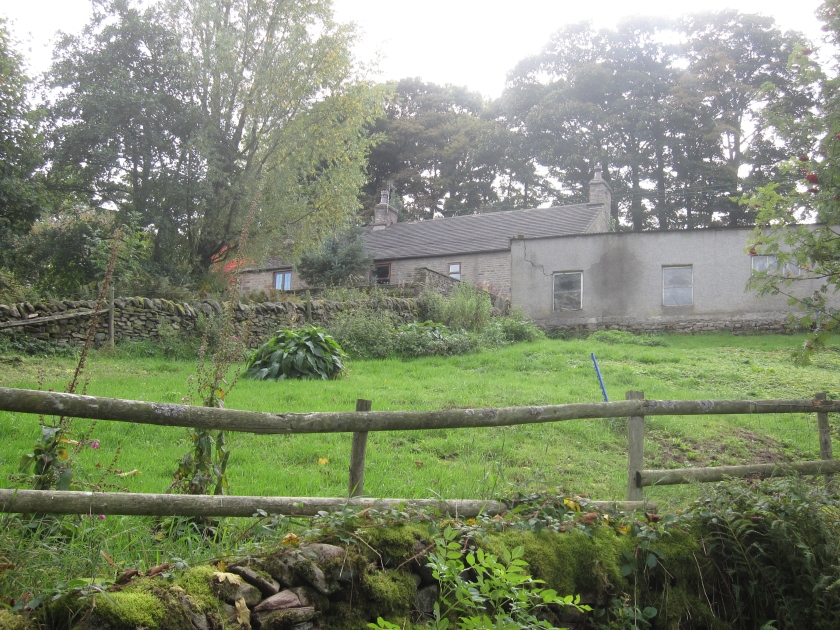 According to an 1895 collection of Derbyshire folklore, the fearsome skull belonged to a woman, killed by her sister after they fell out over a man. The tale specifies that the siblings lived in The Royal Forest of the Peak, which throws the age of the story back to medieval times. Dicky seems a peculiar name for a lady unless perhaps her surname was also Dickinson.

Whichever account of the tale is recounted, it seems to involve someone meeting an unfair and untimely demise and that anyone who seeks to remove Dicky from his or her unconventional resting place on a window sill at the farm is doomed. Various owners of the place have attempted to remove the grisly souvenir, balking at the absurdity of the claims, only to suffer some misfortune and end up putting it back again.

There are photographs of the skull in situ so we can be sure that it did exist and that the individual was not given an orthodox burial. It may be more likely that someone just found the skull in a neighbouring field one day, brought it home and made up a creepy story about it. The Peak District is strewn with ancient burial sites, after all. There were other skulls in nearby Castleton and Flagg and at one time, it was a bit of a fad, especially in the countryside where people were afraid of change. There are other examples of “something that should not be removed or bad things will happen” across the UK; the most famous of which are probably the ravens at The Tower of London. You could say that humans have now swung to the opposite end of the spectrum where alteration is so rapid that many people are scared of being left behind and feel like they will drop dead if they don’t have the latest app or gizmo.

The legend peaks in the 1800s when visitors to the area could buy postcards of the sinister noggin, like this one from the collection of Buxton Museum and Art Gallery. 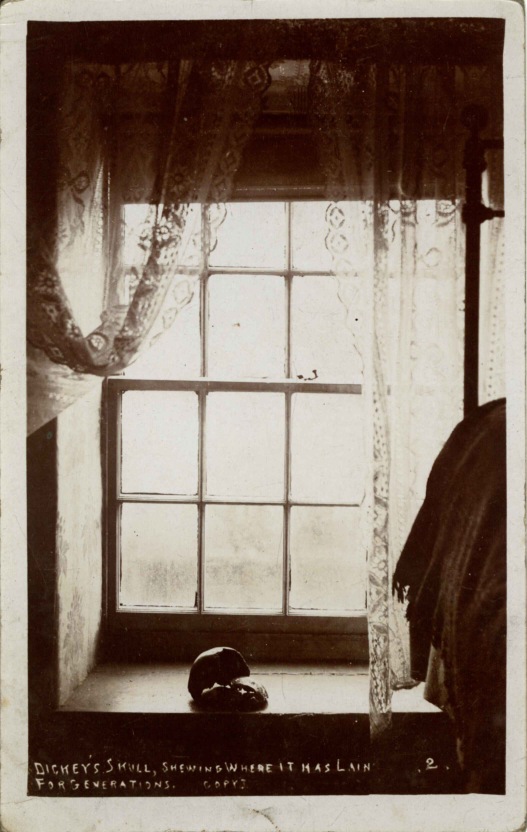 A railway bridge needed to be built on land owned by Tunstead farm which would have linked Buxton with Whaley Bridge. However, the railway company did not seek planning permission from Dicky; big mistake! The curse soon began to take effect on the building work; foundations collapsed and the workmen became ill. In the end, the company decided to put an end to the spiralling costs of going head-to-head with the jinx and decided to build higher up the line at Dane Hey. The story attracted so much publicity at the time that Lancashire poet Samuel Laycock wrote this poem in 1870 called “Address to Dicky”:

An ‘let navvies an’ railways a ‘be;

What harm are they doin’ to thee?

But leov o’ these matters to th’ wick;

After hearing about Dicky a few times, I grew curious and went to visit the skull myself. I wasn’t too sure about the precise location of the farm but I knew it was a stone’s throw from another mystery I had recently investigated where rock drummer Matt Swindells discovered the lair of a family of big cats. I was also aware that adjacent town Chapel-en-le-Frith was the location of one of the first ever recorded UFO sightings in the UK (it’s in the parish register dated 1716). The supernatural associations with this part of the world were starting to stack up. Wandering around Tunstead Milton on a gloomy day, the place seemed deserted and I found myself looking over my shoulder a lot. I found no one, alive nor dead, and went home, imbued with a sense of melancholy. 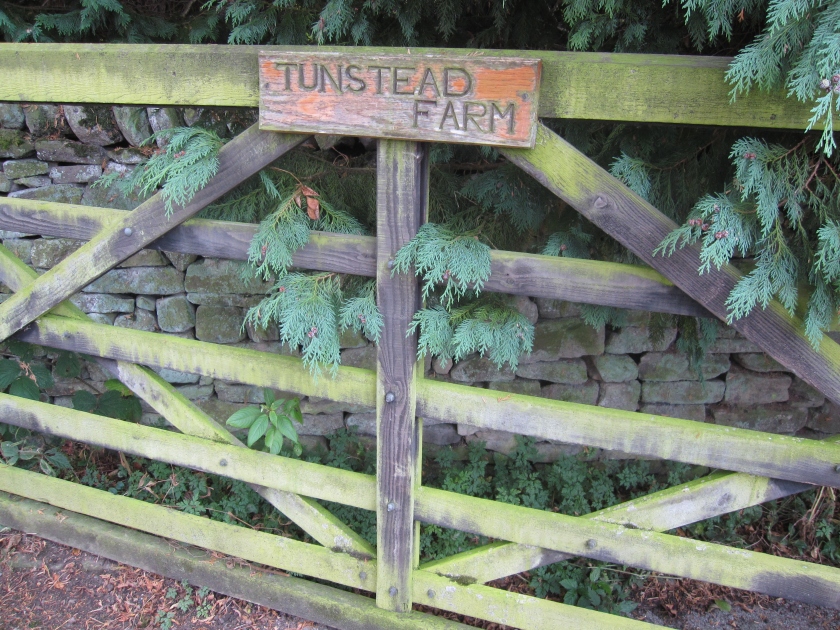 It was not until recently that someone who resides in the area told me that Dicky was laid to rest decades ago, most likely in nearby Taxal Church. I was on a wild goose chase. Apparently, the new owners of the farm were horrified by the infamous skull. They sought to do the right thing and without making a fuss, returned him to the ground from whence he came. Upon hearing this news, I had mixed feelings. It does seem wrong that someone’s remains should become a ghoulish exhibit but also disappointing to know the owner had decided to put the brakes on a Peak District legend. I assume they didn’t endure some terrible consequence. Of course, this is only what someone told me; if you know different, please get in touch.

Amusingly, my friends at Buxton Museum were reviewing their archives recently and found a story about Dicky’s Skull; not another guidebook entry, but an entire semi-fictional script for the stage. The drama is no.9 in a series called Plays of Derbyshire Life and therefore features lots of authentic dialect. There’s lots of “aw, reet?” (a greeting translated as alright? And still quite common today) It was written by someone called Crichton Porteous; a writer with a name even more ridiculous than mine. There’s no date but the adverts suggest it was published around 1930.

In the story, a sophisticated young lady called Alice marries in to a Derbyshire family who live at Tunstead Farm. It’s not long before it becomes apparent that the family are afraid of Dicky’s skull, particularly Grannie; the somewhat menacing old crone of the household. Alice and her husband have trouble pleasing Dicky on their wedding night (a problem most newlyweds face). Quite why an intelligent and cultured woman decides to get involved with a clan not too far removed from the one in The Hills Have Eyes is not explained. Alice soon gets naffed off with pandering to the rotten old skull and chucks it. Of course, Hell ensues.

Any Hollywood directors wanting to discuss translating the tale for the screen, don’t hesitate to get in touch.