Those of you who have been following my blog will be familiar with my reports on occult activity in Buxton in the 1990s. If you haven’t read these troubling tales, then I recommend starting with my encounter here and the update here.

It’s easy to blame the dodgy stuff that was going on in the woods around Buxton 25 years ago on groups of bored hippies exploring alternative religions. However, accounts of mutilated animals and a sighting of a goatman suggest there was something more substantial going on and you can read about that here. 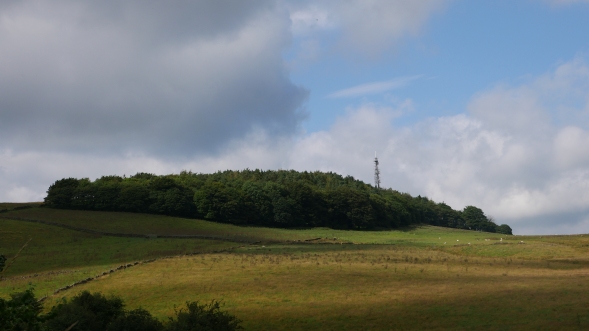 A man called Graeme Howarth has an addition to the whole saga. Like myself and Kenny Robertson, he innocently explored the hills, woods and fields that fringe Buxton as a young man in the 90s and ended up getting a lot more than he bargained for.

Brown Edge Woods occupy a lofty and lonely corner of the Peak District town, punctuated by a communications mast and overlooking what was Lightwood Reservoir. When Graeme and his childhood friends decided to go there, they were already aware of the rumours that the place was used for devil worship. Imagine their shock when they found that the woods were occupied by a large group of peculiar and aggressive people who dropped out of the trees and promptly chased them away. The tree dwellers came to a halt at the edge of the woods but continued to stare at Graeme and his friends until they had vanished from view. Graeme remembers the confrontation in his own words:

It was quite bizarre. Though we had heard rumours, we didn’t expect to find anything but these people appeared almost immediately when we entered the woods; each one coming down from a different tree. We didn’t dare hang around and just ran.
There definitely was some strange things going on back then, it is an interesting subject and something I’ve not thought about for a long time. Though I’ve lived in Buxton all my life, I don’t know anyone who was involved in it.

What’s intriguing about Graeme’s encounter is that it doesn’t involve any ghosts or UFOs or any paranormal activity; just a bunch of people involved in a very strange activity. Why were they all sitting around in trees in a secluded wood? Why mount a quick and coordinated assault on a group of curious young men? What were they trying to hide? If somebody somewhere knows the answer to these questions, please get in touch. Otherwise, the mystery of Brown Edge Woods will become just another chapter in a perplexing parade of odd behaviour.

Visiting for myself, I found Brown Edge Woods to be a very quiet place that’s difficult to access. The ascent from Lightwood is wild and steep and the woods are fenced off. There was not a soul to be seen and I found it easy to imagine that if you were up to no good, this would be an ideal spot. There’s some sort of farm or station to accompany the communications mast on the far side of the trees but I don’t know if this was inhabited 25 years ago at the time of the incident.

I’ve been told by older Peak District residents that “there was a lot of this sort of monkey business going on at one time”. Nowadays, with most people carrying a camera phone and instant access to the World Wide Web, running a group that performs secret rites and rituals would be virtually impossible. The likelihood is that most of this so-called Satanism amounted to harmless nonsense but such outlandish stunts still haunt the memories of people who were witness to it.

Keep following World of Wolfson for terrifying tales of The Goyt Valley and get in touch if you would like to comment or contribute.

World of Wolfson on Film

I was surprised when a young film-maker named Alex Beresford got in touch to tell me he was making a documentary based partly on my experiences. I was equally astonished when he said he wanted me to appear in it. I’m the old hideous-looking one in the middle. So here it is; the stories told … END_OF_DOCUMENT_TOKEN_TO_BE_REPLACED

Unidentified flying objects or UFOs don’t make the headlines like they used to. It’s almost like they’ve gone out of fashion. This may be due to the fact that recent scientific research has established that although we may not be alone in the universe, visitors from another world probably aren’t traversing the vast distance to … END_OF_DOCUMENT_TOKEN_TO_BE_REPLACED

Guest blogger Bret Gaunt from Buxton Museum and Art Gallery reveals a grisly artefact from the collection and its place in folklore. Over to you, Bret: Cats have played an important role in the everyday life of humans: as companions and for hunting vermin, as well as being both revered as gods, and reviled as … END_OF_DOCUMENT_TOKEN_TO_BE_REPLACED